The setlist hasn't been submitted yet, please encode it if you can.

It's 3am, and I just got home from the worst Fishbone concert ever (out of 20+). And, what seems to be one of fishbone's worst days ever, although, touring life is tough...it might have just been another Tuesday for them (I could never get ahold of Tuesdays...)

Now you now Chaos is the name of AKP's album, right. I haven't bought it but they're growing on me (after 6 shows).

This Fishbone show stunk---from the ultimate fan. I couldn't even tell you what they played. I know they played Behavior but I couldn't even attempt to stage dive. Yeah, the bus broke down. You can't blame them. Then I guess Wood and manager, etc. got l...

I was at the chicago show too, i met jeff, dave, kcholly i met you at the end...and i met some other people who aren't on the list, just kinda met them, that was pretty cool. I did get to give them the icecream cake, didn't get a picture of it though. I had to stop at work and pick it up, then take a bus, i had to run with this big ass cake box to the bus and i was right next to it, waving at th...

I arrived in Chicago Sat around 11:00 pm to find out George Clinton was staying at my hotel (Knickerbocker) but had checked out 1 1/2 hrs before my arrival!In addition he opened up Taste of Chicago and it was his birthday! If only I had known I would have showed up friday!Happy belated George you fuckin' freak!Sunday I didn't sleep stayin' up to create two flyer designs for the 'BONE show Tue at t...

0 live recording
If you have a recording of this show, please share it with the familyhood ! 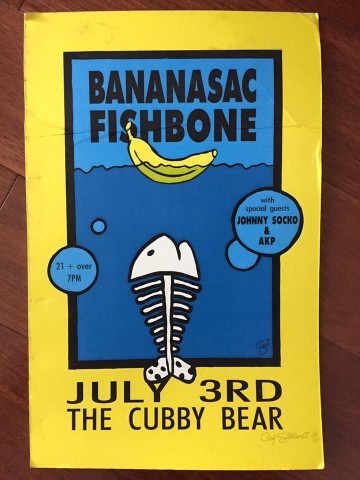