0 photo
No photo has been uploaded yet.

The Netherlands won their opening match at the World Championship, so there were a lot of people partying in the streets around the concert hall (all of them wearing orange t-shirts and more ;-) )

We arrived a little bit early in Tilburg and had a typical Dutch beer (Heineken) with some Mexican food (Quesadillas)...

Man, since the first reviews of the euro tour were so so, i feared the worst for this gig, but was i to be mistaken !!!

the show started off with an usual "Everyday sunshine" and ended with a blazing 10 minutes long version of "Party at ground zero", a couple of hours later. In between, "the same old songs" but without a weak moment, except for my drinking song (Ma&Pa - whic...

A bit late but better than never. I just got back from my little trip to the wonderful country of Holland where I was able to catch Fishbone in Tilburg. I have to agree with Arne and Denis that it was a fantastic show. I had a blast and got my fishbone fix after a 10 month withdrawal period since I saw them at the Paradiso in Amsterdam last August. In Tilburg it was a nice sized venue, appreci... 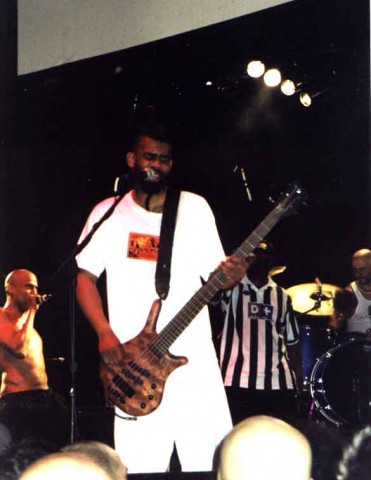