Great show, great setting...weak crowd. The dancing was pretty lame. Not sure if the crowd knew how to get up for a Bone show. The setlist needs to change too, same old mix of new & old songs. The highlight was hours earlier when half the Coup didn't make the fest so a couple of Fishbone (John & Norwood) filled in and and the set absolutely rocked!

I'm in complete agreement with zeekster. The venue was absolutely fantastic, as were the majority of the performers. A 2 day event in an organic hayfield in the mountains of Vermont's Northeast Kingdom. Fishbone was great, but yes, the setlist is getting a bit tired. Nice to see Cholly and Give It Up (In Your Face is my fav album). The biggest problem was the crowd, and Angelo's recognition o...

I hadn't seen Fishbone since 2003, and I thought this show was off the hook! The band is possibly tighter than I've ever seen them (first show: SUNY Albany in 1988), and I was really impressed with the new lineup (it was Fernando on trumpet, I believe). Yeah, the Vermont crowd probably wasn't the greatest, but it's an awesome festival and was a great space for Fishbone to do their thang. I got som...

Review found on the web

The Northeast Kingdom Music Festival serves up a classic August 10, 2007 By Tom Huntington Arts Correspondent (...) Punctuating the stellar affair was an impressive performance by Los Angeles funk-ska-punk band Fishbone, which delivered a blistering two-hour set that proved that the longtime underground legends is still one of the baddest and most relevant bands alive.

0 live recording
If you have a recording of this show, please share it with the familyhood ! 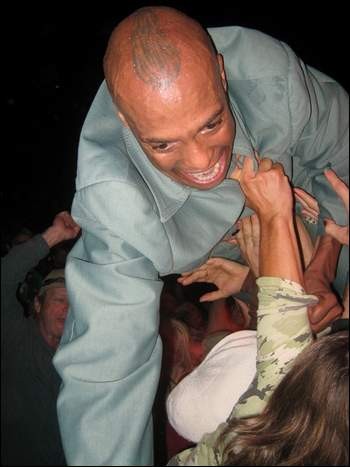